Adaptive moving average (AMA), as the name suggests is an adaptation of moving average. It is designed to adapt according to the dynamic market as needed.

However when the market is range bound they pick up a lot of market noise generating a lot of premature signals.

Moreover, they are all inherently lagging in nature. 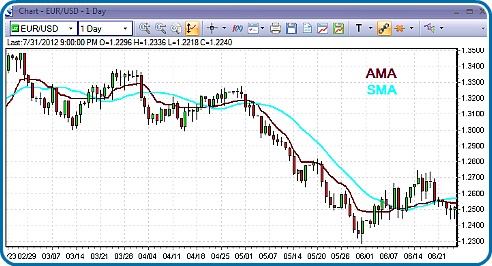 The reasons behind employing multiple combination of moving averages are based on the following facts:

So the genius in Kaufmann's AMA was a system smart enough to vary its speed according to a combination of market direction and speed.

Thus it righteously earns the name "adaptive" as it self adjusts to market direction and speed.

Let's do some math but first let's really understand what the efficiency ratio translates to in plain simple language.

By the end of our discussion you will be amazed to discover how Kaufmann ingeniously incorporates efficiency ratio in designing smart system that can adapt to market direction and speed.

Now ratios are used to make comparison between two things.

In our case of finding Efficiency Ratio (ER) we are basically attempting to determine whether the market is directional (trending) or volatile (market noise).

Price direction can be expressed as the net price change over time.

where,
direction = the current price direction
price = current price (daily close or hourly close)
price_n = the close n-days ago (or n-periods ago)

The best way to express volatiltiy is to calculate the sum of all the day-to-day or hour-to-hour price changes ( each taken as a positive number), over the same n periods.

where,
volatility = today's volatility value
absolute value (positive value of any numbers)
sum = the sum of "value' over n periods

This idea of efficiency ratio is so significant as we will see how one can transform lagging and noise producing SMA to trend catching, and noise filtering adaptive moving average (AMA).

Let's look at to the EMA formula first...

Next we will employ our newfound efficiency ratio (ER).

Our above new formula shows that the exponential average gets closer to today's close by percentage, c, of yesterday's gap.

Following are the trading rules for the Adaptive Moving Average: