The moving average is a widely used trend following indicator.

It can be easily evaluated and tested and thus it is considered as the foundation for many trend following forex trading robots.

However, as a trend following indicator, it lags the market action.

It keeps track of trend once it progresses but it will not predict trend reveresal.

There are three following types of averages commonly used in technical analysis:

In mathematics, the average also known as the simple moving average or the arithmetic mean or simply mean measures the central tendency of a set of data.

Mathematically, average (A) = sum of the numbers / size of the collection

For example: Consider calculating moving averages of 7 days. Since closing prices are the most preferred data in technical analysis, we will stick with closing prices.

In the first example, we simply calculate average of first seven set of data and divide by 7 to arrive at 11 as the first day 7-day average.

When calculating successive values, a new value comes into the sum and an old value drops out.

So in this example, as the price progresses with time, so does averages. Daily closing prices in our above example moved from 8 to 16. Likewise averages moved from 11 to 13.

Hence this average is named moving averages as it moves along with price movement.

Also notice, that averages is always less than the last closing price of that day.

The first day 7-day average 11 is less than the last closing price 14.

The simple moving average, though simple to implement to track progress of market trend is often criticized for following reasons:

Also known as the linearly weighted moving average or simply WMA addresses one of the criticism of the simple moving average (SMA). It introduces multiplying factors to assign different weights to data at different positions during the sample window.

So the WMA is greater than SMA for the same period in above example. Hence, WMA reduces the lag in the SMA by applying more weight to the recent close prices.

However the linearly weighted moving average (WMA) still does not address concern regarding the criticism that the only periods covered by WMA itself is taken into consideration.

It includes all the data in the life span of the instrument being examined. It also assigns greater weight to the more recent data.

where,
Price_today is the close price of the day and
α is the smoothing factor.

For the first calculation of EMA, the simple moving average is used instead of EMA_yesterday since the EMA has to have a starting point.

We need three pieces of information in order to calculate EMA.

First, let's calculate 7-day SMA since we will need to use it in place of EMA_yesterday for the first calculation of EMA.

This implies that for a 7-day period EMA applies a 25% weighting to the most recent price.

In our day to day trading life, implementing moving averages on chart or candlestick analysis is just as easy as a click of button. Thanks to revolution in forex trading systems more and more technical indicators are available to just any traders at any level.

The moving averages could be applied to generate buy and sell signal. I will mostly discuss signal generation using moving averages in conjunction with candlestick chart.

The Use of A Single Moving Average

Using the simple moving average a buy signal is generated when the bullish full bodied candlestick close above the SMA line.

A sell signal is generated when the bearish full bodied candlestick close below the SMA line.

Applying a single moving average to generate signal has its own limitations. It needs fine tunning at the mercy of expert traders to generate consistent and profitable signal.

For example, a shorter period averages like 5 or 10-day SMA generates more signals as they are more sensitive to price fluctuation. They often generate more noise or premature signals as well.

On the other hand, a longer period averages like 50 or 100-day SMA generates less signals and are more reliable when trend is intact. They do a good job in filtering out noise, however, are worthless during trend reveresals. 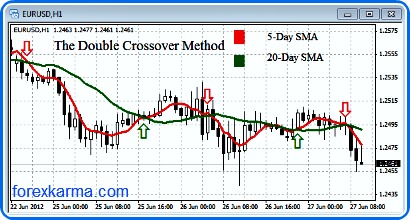 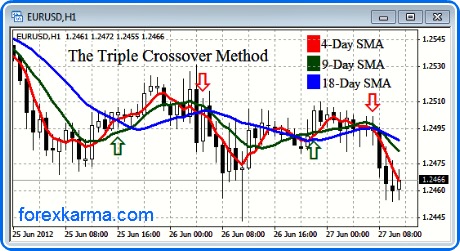 In applying three moving averages in combination, the shortest period is the most sensitive and follows the trend very closely.

For example, in applying 4-9-18 day moving averages, the 4-day will follow the trend closely followed by 9-day and 18-day.

So the proper alignment in any case to generate a valid signal would be 4-day SMA followed by 9-day and 18-day SMA.

In a downtrend, a buy signal is generated when the 4-day SMA crosses above the 9-day SMA, which is above the 18-day SMA.

In an uptrend, a sell signal is generated when the 4-day SMA crosses below the 9-day SMA, which is below the 18-day SMA.