A trend in a financial market signifies the general direction of the market. 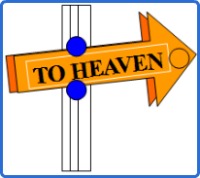 Unlike a straight line that represents direction in our real life, market directions are characterized by a series of zigzags. 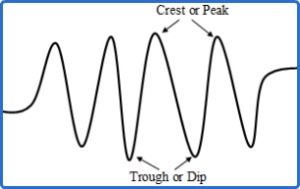 Peak and Trough Of a Wave

Trend directions are categorized as: uptrend, downtrend, and sideways trend.

A series of successively higher peaks and troughs illustrate an uptrend.

A series of successivley declining peaks and troughs illustrate a downtrend.

The trend is classified into three categories namely: the major, intermediate (secondary) and the near term (short term) trend. 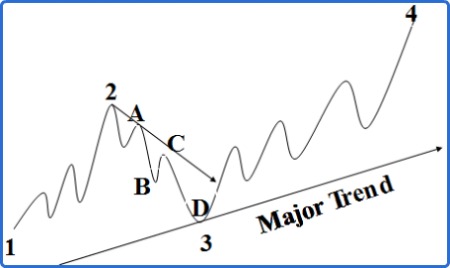 According to the Dow Theory the major trend lasts longer than a year. The intermediate or secondary trend lasts anywhere between three weeks to few months. And finally, the near term trend lasts less than three weeks. Depending on the financial market sector, the time length for each category of trend may vary.

Quite a bit of ambiguity arises among traders as a result of time length variation to classify three different trends. So depending on the financial market sector, its all upto an individual trader to decide for themselves to determine time length for the mjaor, intermediate and the near term trend.

Understand though that the Dow Theory identified the three classification of trend primarily for timing purpose. The major trend is used to identify the overall market trend. The intermediate trend identifies the trading direction and the near term trend can be used to initiate market entry.

Market trend comes in series. That being said, each trend becomes a portion of its next larger trend.

Trend lines are lines that are drawn along either peaks (rally, highs) or troughs (dips, lows).

Trend lines are simple yet very effective technical analysis tool. Learning to draw correct trendlines pays off in many ways. It is pretty simple on smooth market price movements.

The only prerequisite to drawing any trendlines is the presense of a trend. Once the trend - an uptrend or downtrend, is in effect we can draw trendlines.

To draw an up trendline, there must be two reaction lows with the second reaction low higher than the first one as shown in the figure below. So up trendlines are drawn straight to the right along successive reactions lows. 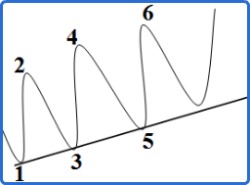 Figure A. Up Trendline

To draw a down trendline, there must be two reaction highs with the second reaction high lower than the first one as shown in the figure below. So down trendlines are drawn downward to the right along successive rally peaks or highs. 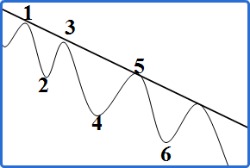 Figure B. Down Trendline

In the figure A, a tentative up trendline was drawn when two reaction lows at point 1 and 3 were formed. And the successful test of the up trendline at point 5 confirmed the validity of this trendline.

Figure B shows a down trendline, but the same rule applies.

APPLICATION OF A TRENDLINE

One of the basic foundation of technical analysis is that prices move in trends.

The corollary to this premise states a trend in motion is more likely to continue until it reverses.

So as long as the trend is intact, trendlines could be used as a buying and selling areas. 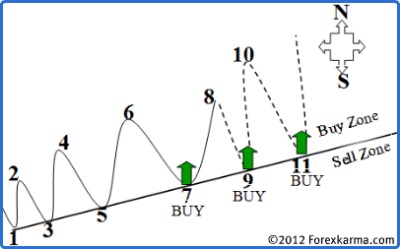 Buy and Sell Zone in an Uptrend

In the above figure, north side of a trendline marks a buy zone and the south side marks the sell zone.

In an uptrend, the trend line acts as a support. So whenever the price dips to point 7, 9, 11 a buy position can be initiated.

In a downtrend, the trend line acts as a resistance. So whenever the price rallies to point 7, 9, 11 a short position can be initiated. 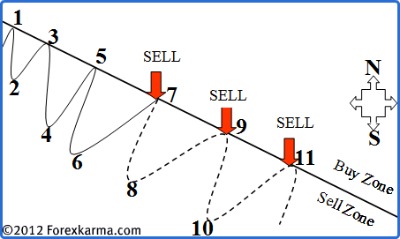 Buy and Sell Zone in a Downtrend

However when trend lines are violated, they send an early sign of change in the existing trend.

In summary, a trend is a friend until it bends. But when the trend lines bend, it is time to liquidate all positions initiated in the direction of previous trend.

IMPORTANCE OF A TRENDLINE

Three factors determine the importance of a trendline: 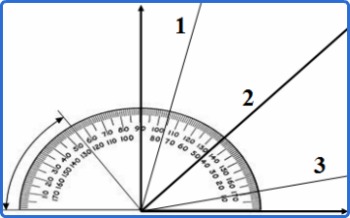 In the above figure, when the trendline 2 advances in approximate of 45 degree line, such trendline is more significant. This is because at such a rate price and time are in near perfect balance. Thus such trendline is relatively stable.

When the trendline 1 advances too steep, it indicates that the price are moving foward too quickly. Such rapid rate of ascent is unstable in the long run hence steep trendline bears less significance thus less confidence too.

Similarly when the trendline 3 is nearly flat, it indicates that the trend is too weak.

VALID BREAKING OF A TRENDLINE AND ITS ROLE REVERSAL

Technicians exercise variety of time and price filter in order to identify valid trendline penetration and avoid bad signals or "whipsaws". Depending on the type of financail market, some use 1% while others use 3% penetration critera. This means that the trendline be broken on a closing basis by at least 1% or 3%.

In stock market, generally the two day rule is the most commonly applied in determining the valid penetration of a trendline. It requires that price penetrate the valid trendline and close beyond the trendline for two successive days. 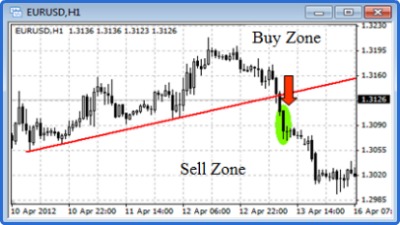 Likewise, in the case of downtrend, a valid penetration of a trendline rquires a full bodied bullish candlestick formation beyond the trendline on the north side or buy zone. 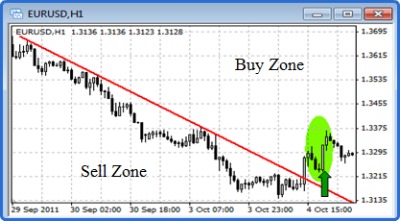 Often times, a valid penetration of trendline signal only the change of a more steep trendline to a more sustained trendline. But when major trendline is violated trends change direction and so does the role of trendlines. 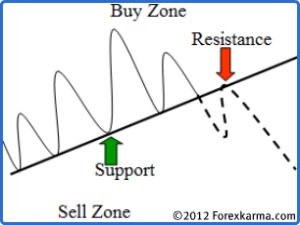 Similarly in a down trend, downtrendline acts as a resistance line. When this downtredline is violated, it acts as a support. 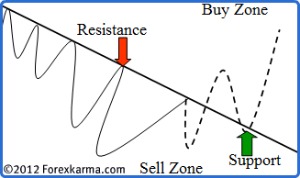