Bollinger Bands are technical indicator developed around 1980s by John A. Bollinger. 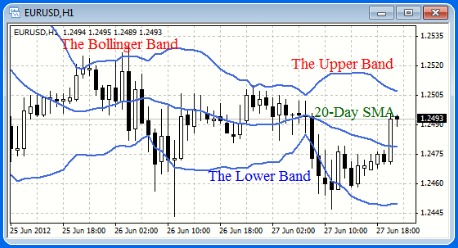 The standard deviation is a statistics concept. It measures how spread out a set of data is from the average (mean or expected value).

A low standard deviation number informs that the data points tend to be clustered close to the average.

The high standard deviation number on the other hand informs that the data points are spread out over a large range of values.

So How Does Standard Deviation Measure Volatiltiy?

So if the prices are spread out, it means that the market is more volatile. The bands expand on high volatility.

On the other hand, if the prices are closed to the 20-day simple moving average then it means the market is less volaitile. The band contracts on low volatility.

These high and low volatility can be plotted in charts which essentially forms the upper band and the lower band in the Bollinger Bands indicator.

The middle line is the 20-Day Simple Moving Average (SMA), the Upper Band (UB) and the Lower Band (LB).

Also the Upper Band and Lower Band are each plotted 2 standard deviations away from 20-Day SMA.

Application of Bollinger Band in Trading

So these upper bands and lower bands can be considered as the price targets.

When the prices bounce off the lower band and crosses above the 20-day SMA, a buy signal could be generated with an upside target reaching the upper band limit.

Similarly, when the prices dip from the upper band and crosses below the 20-day SMA, a sell signal could be generated with a downside target reaching the lower band limit. 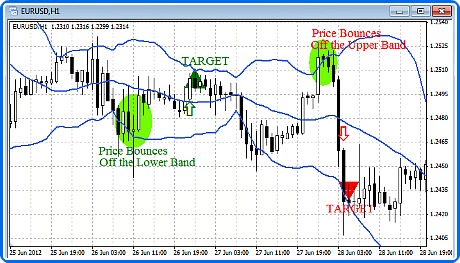 If prices break through the upper band then a continuation of the current trend is to be expected.