Interest Rate Parity (IPR) theory is used to analyze the relationship between at the spot rate and a corresponding forward (future) rate of currencies.

The IPR theory states interest rate differentials between two different currencies will be reflected in the premium or discount for the forward exchange rate on the foreign currency if there is no arbitrage - the activity of buying shares or currency in one financial market and selling it at a profit in another.

The theory further states size of the forward premium or discount on a foreign currency should be equal to the interest rate differentials between the countries in comparison. 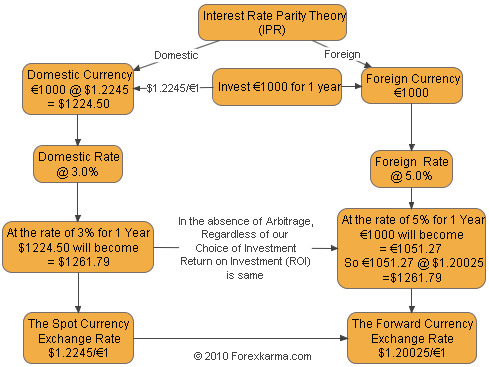 For our illustration purpose consider investing € 1000 for 1 year.

Thus, in the absence of arbitrage, the Return on Investment (RoI) is same regardless of our choice of investment method.

There are two types of IRP.

In another words, covered interest rate theory holds that interest rate differentials between two countries are offset by the spot/forward currency premiums as otherwise investors could earn a pure arbitrage profit.

Assume Google Inc., the U.S. based multi-national company, needs to pay it's European employees in Euro in a month's time.

Google Inc. can achieve this in several ways viz:

Under this model Google Inc. is sure of the interest rate that it will earn, so it may convert fewer dollars to Euro today as it's Euro will grow via interest earned.

This is also called covering because by converting dollars to Euro at the spot, the risk of exchange rate fluctuation is eliminated.

In the above example of covered interest rate, the other method that Google Inc. can implement is:

This method is uncovered because the exchange rate risks persist in this transaction.

Recent empirical research has identified that uncovered interest rate parity does not hold, although violations are not as large as previously thought and seems to be currency rather than time horizon dependent.

In contrast, covered interest rate parity is well established in recent decades amongst the OECD economies for short-term instruments. Any apparent deviations are credited to transaction costs.

In many cases, countries with higher interest rates often experience it's currency appreciate due to higher demands and higher yields and has nothing to do with risk-less arbitrage.