Support and Resistance - What Everybody Ought To Know

Support and resistance is one of the most frequently applied terms in technical analysis.

Support also known as troughs or dip or reaction lows is the level where buying pressure is greater than the selling pressure. So at this level, the bulls are in control and thus take the price to a higher level.

Resistance also known as peaks or rally or reaction highs is the level where selling pressure is greater than the buying pressure. So at this level, the bears now gain control and thus drag the price to a lower level.

Having learned support and resistance, now we refine our vocabulary and explain trend in terms of these new wordpower.

An uptrend consists of higher highs and higher lows.

In this figure higher highs and higher lows signal an uptrend.

A downtrend consists of lower lows and lower highs. 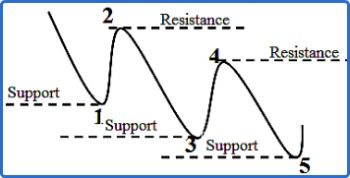 In this figure lower lows and lower highs signal a downtrend.

Every time market tests support and resistance level, the trend is in crucial phase.

In the case of downtrend, when market tests the support level, it must penetrate beyond the previous support level in order to maintain the downtrend. Failure to do so potentially gives rise to trend reversal and also the role reversal of support level and resistance level.

As this trend reversal progressess, the support level and the resistance level switch their role.

I think of the trend reversal scenario in conjunction with a mountaineer climbing the Mt. Everest. As the mountaineer approaches the summit she/he is also reversing the role from ascent to descent unless one decides to settle down at peak of the Mt. Everest.

PSYCHOLOGY BEHIND SUPPORT AND REISITANCE AND THEIR ROLE REVERSALS

Trading is a psychological warfare among traders of all size and from all over the planet. In our attempt to understand psychology behind why and how support and ressistance works so beautifully in trading we will attempt to decode psychology of traders in any market.

The traders in any market can be categorized as: the longs, the shorts, and the neutral.

For the illustration matter, consider a forex market hoovering some where at around support area. Now assume the market gather steams out of good news and thus starts to move higher from the support area. 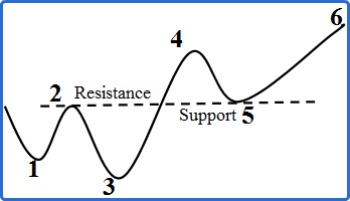 In this figure, wave 2-3-4-5 shows how as the downtrend reverses, resistance becomes support.

Now the real mystery of trading begins to unfold gradually.

The longs, traders with buy positions, are glad that the market price is moving higher in their favor.

The higher market price should send wake up call to the neutral party. Then they desire to enter the market on the long side on the next favorable buying opportunity.

However, if the prices start to move beyond the support level, the reaction just becomes opposite.

Traders with long positions are the one now praying as the price advances against their favor. They are hoping they could get out of the market at break even point. And they desire to cover any losses by initiaing short position on the next favorable selling opportunity.

The shorts are partying as the prices decline lower and lower in their favor.

The lower price once again wakes up the neutral party to jump on the bandwagon on the sell side. 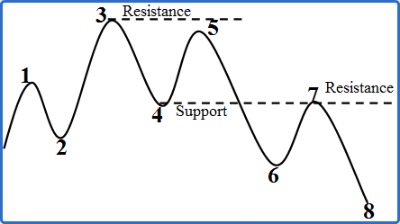 In this figure, wave 4-5-6-7 shows how as the uptrend revereses support becomes resistane.

And in a very sleek manner, now the market has gone through remarkable metamorphosis. Support has become resistance.

SIGNIFICANCE OF SUPPORT AND RESISTANCE

The significance of any support and resistance level is established based on three factors:

For example, if price trades sideways for four consecutive weeks near support level before advancing to next higher level, that support area is considered more significant than if only four consecutive days of trading had taken place.

Volume is another leading factor in determining the significance of support and resistance level.

The last but not the least way to identify the significance of the resistance and support level is by identifying how recently the trading took place. The support and resistance are ultimately the by-product of market participants' reaction to the price movement. So the more recent the activity, the more influential it becomes.

In other words, the reaction of the market participants' is more eye-catcing near fresher support and resistance level.

ROLE OF ROUND NUMBERS AS SUPPORT AND RESISTANCE

Market price tends to stall advances or declines around round numbers. Therefore these round numbers act as a psychological support or resistance level.

As a rule of thumb, as the market price approaches round numbers it is wise to take following actions: