The flag pattern is formed quite frequently. It is considered as one of the most reliable continuation pattern.

It is so named as the pattern resembles a flag shape.

This continuation pattern formation illustrates brief pauses in a price breakout only to gather enough steam to continue it's advance in the previous trend direction. 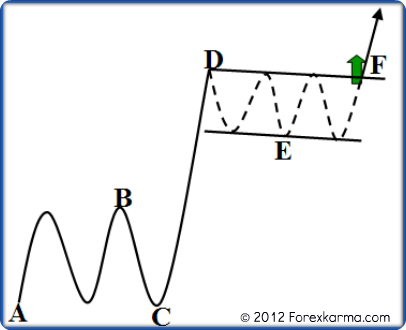 In the figure above, swing A-B-C represents brief pause or consolidation after an uptrend move.

Finally, swing D-E-F represents another pause before it breakouts penetrating the upper trendline represented by line D-F and resumes it's previous uptrend direction.

The following requirements must be met in order to classify a pattern formation as the bullish flag pattern.

Typically the flag pattern should be completed within two weeks range and no longer than three weeks time frame.

As the pattern formation progresses forward, the time is running out for price to emerge out from its cocoon of consolidation. Prices must shoot off in the uptrend direction in the case of bullish flag pattern.

If prices continue to remain in consolidation for a long time then the pattern loses its significance.

An upside penetration of the upper trendline represented by line D-F is essential for the completion of this continuation pattern.

The volume is low and often diminishes while in consolidation phase.

In the figure above, swings A-B-C and D-E-F represent consolidation phase. During this phase volume is light.

For the bullish flag pattern, upside projection potential can be carried out in the following way. 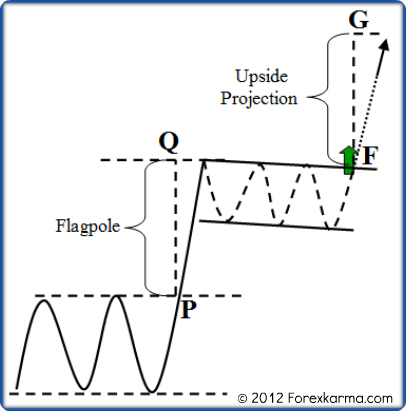 First measure the height of the flagpole from the first price breakout point.

In the figure above, the first price breakout occured at P so PQ is the height of the flagpole.

Next, project that flagpole height as the upside potential from the next point of breakout.

In the figure above, the second price breakout occured at point F. So height FG is the upside projection of the flagpole height PQ.