Consider a downtrend represented by a solid line that passes through points 1, 3, 5. 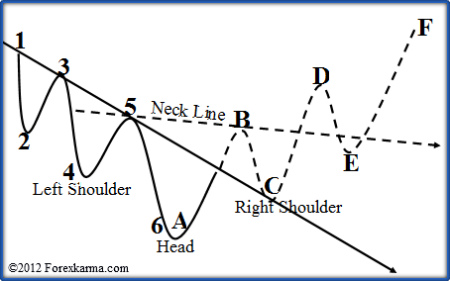 The corrective rally from low point A is well expected as a reaction. But it is also expected for the rally to pause at around the trendline level. Should the downtrend continue, the price should bounce off the trendline and move lower to the south side since the trendline should act as a resistance.

However, the trendline gets violated and the price rallies further to point B. This raises yellow flag of caution that potentially trend reversal is in progress.

Next consider the swing B-C.

The price bounces off and moves lower from point B to C. At point C the price rendezvous the previous trendline which now becomes the support level. For the downtrend to continue the market must dip beyond point C and beyond point A to make new lower lows.

However, the market fails to make lower move byeond point C. This should be sufficient reason to liquidate all short positions.

The price rallies up after touching the support line at point C and rallies up to point D resulting in breaking of a neck line. The breaking of the neckline completes the formation of inverse head and shoulders pattern.

Usually the price traces a downward return move to point E from point D just to rendezvous the previous neck line which now acts as a support line. This point E could potentially become the point to initiate long positions.

Volume plays even a more significant role in carving this elegant inverse head and shoulders pattern. Market requires greater amount of volume to launch an uptrend swing as compared to minimal effort in the case of launching a downtrend.

In general, volume should increase in the direction of the trend.

Reflecting on the role played by volume in carving the inverse head and shoulders pattern above, volume should increase significantly on the breaking of the neckline along the swing C-D. Next it should decline on the return move along swing D-E. Then finally, it should again expand significanlty along swing E-F launching it to new higher highs.