The symmetrical triangle is usually a continuation pattern. It is inherently neutral, i.e. neither bullish nor bearish. It usually resumes in previous trend direction.

It's formation signals that a market is in a consolidation phase until it gathers enough steam and shoots off the roof in the previous trend direction. 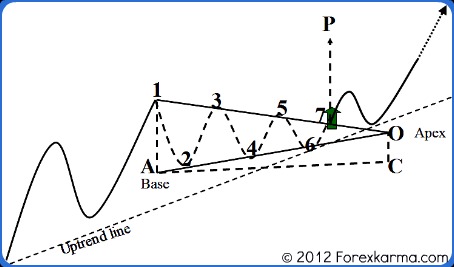 In the figure above, the upper trendline represented by a line that passes through 1-3-5 is descending.

The lower trendline represented by a line that passes through 2-4-6 is ascending. These two lines converge at a point O called an apex.

The vertical line represented by 1A that measures the height of the triangle is called a base.

As the pattern formation progresses forward towards the apex, the time is running out for price to emerge out from its cocoon of consolidation. Prices must shoot off in the previous trend direction.

An upside penetration of the upper trendline represented by line 1-3-5 is essential for the completion of the symmetrical triangle formation.

If prices continue to remain in consolidation for a long time and beyond apex then the pattern loses its significance.

The geometric shapes of the triangle furnishes significant price and time information creating a strategic advantage to a skilled technical analyst.

The two converging trendlines represented by line 1-3-5 and 2-4-6 provides boundary for price. In order for pattern formation completion, price must shoot off in the previous trend direction prior to reaching an apex at point O.

Usually the breakout in the prior trend direction should occur somwehere between two-thirds to three-quarters of the horizontal width of the triangle represented by line AC.

As the triangle formation progressess, prices consolidate in a narrow bandwith formed between the lower trendline and the upper trendline. Hence, during this period volume gradually diminishes.

As the price break out in the previous trend direction, the volume bar must rise significantly. This is specially true in the case of uptrend.

A lot more effort from bulls are required to penetrate upper trendline and shoot the price to the roof.

In the case of down trend, prices tend to fall off its own gravity.

Usually the price return near to the apex, just to get another support and then shoot off. The return move should occur on lighter volume.

However, the volume should again rise as the price climbs higher.

For the bullish symmetrical triangle, upside projection potential can be carried out in two ways. 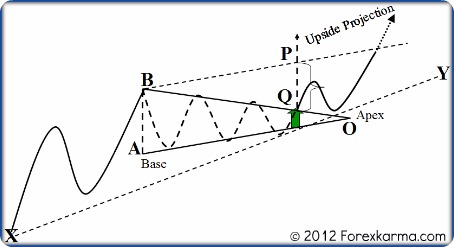 The first method is to measure the height of the line AB and project that height as the upside potential. In the figure above, the point Q is where the breakout occurred. So line QP is projection of line AB.

The second method is to draw a trendline BP parallel to the lower trendline AO. By doing so the line BP forms an upper channel line which becomes the projected upside target in an uptrend.