A triple bottom is a bullish reversal candlestick pattern.

The triple bottoms is also a slight variation of inverse head and shoulders pattern.

The primary difference between the triple bottom and the inverse head and shoulders pattern is that the three troughs are formed at about the same support and resistance level in the former case.

Consider a downtrend with each successive lower lows and higher lows. 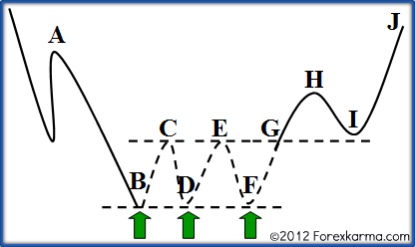 Next consider the formation of the lowest trough A-B-C with declining volume. Declining volume suggests that the downtrend is fading away. Then the price swing sideways for a while.

Notice how swings A-B-C, C-D-E, and E-F-G all swing about the same support and resistance level.

This is the scenario where bulls and bears are in tug of war in an attempt to gain control. Untill the winner is decided, the price will swing about the same support and resistance level.

The triple bottom formation is complete when the resistance level represented by a dotted line C-E-G-I is violated with significant increased volume.

When the resistance level is violated bulls are in full control and takes the price higher. Thus the uptrend commences henceforth.

Volume plays a significant role in carving this elegant triple bottom bullish candlestick pattern. In general, volume should increase in the direction of the trend.

Significant increase in volume is necessary as it plays crucial role in shooting the price from the support level to new high in the case of triple bottom pattern formation. That is not the case with triple top pattern as price tend to fall off of its own gravity from the high point.

Reflecting on the role played by volume in carving the triple bottom pattern above, volume should be light on each trough formation at points B, D and F.

Volume then should increase on the breaking of the resistance level along the swing F-G-H.